The company is recognized for the invention of the OCC Auger Screen which eliminates the need for a presort. 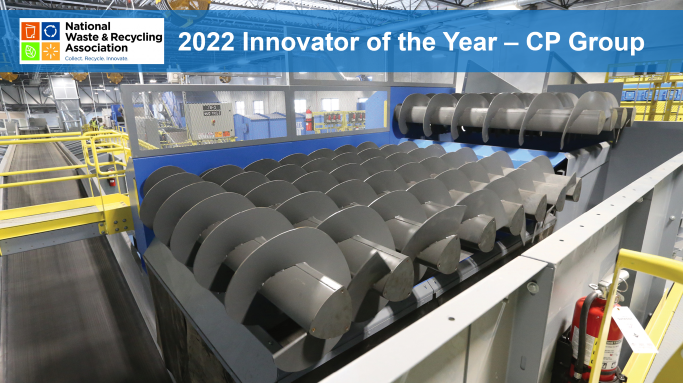 The OCC Auger Screen is a non-round anti-wrapping and anti-jamming auger screen that does not need to be presorted and creates a finished OCC product. Because the screen is cantilevered, all wrapping materials screw off the end, making it very low maintenance with minimal cleaning required. The screen fractionates out the smaller material stream, so sorters only see the larger stream which improves sorter safety by reducing exposure to sharps.  The patented non-round attribute of the auger flights creates the agitation needed to produce a clean OCC product.

The machine prototype design was complete in 2017 and the first machine was manufactured in 2019. After months of testing, that prototype machine was installed in the Waste Connections Ecosort facility in Eugene, OR, which processes commercial material and is still running today.

Over the past several years, CP has invested into its production capabilities to keep up with growing demand. Over multiple years of research, CP purchased a specialized machine with proprietary flight-forming technology.

With this specialized flight-forming machine and CP’s manufacturing capabilities, CP is able to fulfill Auger Screen orders in-house without any outsourcing. This includes the production of the patented non-round auger of the OCC Auger Screen that creates the material agitation needed to produce a clean OCC-end product.

The first residential single MRF utilizing a non-round OCC Auger Screen for the direct and final screening of OCC material began operation in late 2021.The Metro Waste Authority (MWA) MRF in Des Moines, IA, is the first high volume single stream MRF in North America to operate without a presort or post sort station of any kind – all removal of non-program material is performed at quality control stations or is the negative sort of the system – which is a 100% reduction in labor dedicated to non-program material.  This is due to the innovation of the OCC Auger Screen paired with the CP primary Auger Screen.

“MWA is the first single-stream processor in the world to adopt and implement the OCC Auger Screen. The screen, located at the front of the system, captures more material, decreases contamination, significantly reduces maintenance downtime, and eliminates the presort, making the process safer and much more effective,” said Michael McCoy, Metro Waste Authority Executive Director.

This is a landmark MRF which brings the entire industry a significant step closer to full automation, while also reducing labor and downtime caused by the challenges of traditional presorts.

“The OCC Auger Screen is truly the first of its kind innovation that lends itself to the next phase in MRF process evolution and automation. It is the catalyst to the MRF of the Future by eliminating the presort and enabling more automation,” says Ashley Davis, Director of Sales and Marketing, CP Group.

Several OCC Auger Screens are currently in production and even more in the quote process. CP thanks the NWRA for this prestigious award which recognizes the value that CP and this machine has brought to the industry.