Equipment Innovations Give a Big Boost to Plastics Recycling

(This article originally appeared in the April 2016 edition of Plastics Engineering. Click here to read the original article.)

EQUIPMENT INNOVATIONS GIVE A BIG BOOST TO PLASTICS RECYCLING

From technology upgrades to equipment that deals with mounting problems with incoming materials, equipment manufacturers are providing solutions to help plastics recycling grow 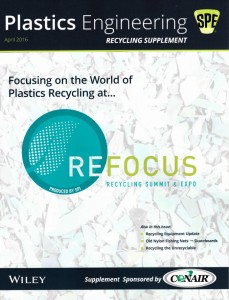 The growth in plastics recycling, the increased amount of contamination in bales, and the need for reclaimers to become more efficient to offset a tight pricing market are driving innovations in recycling equipment and technology. The innovations run the full spectrum of the recycling process from sorting, washing, cleaning, and drying to the production of the recycled flakes themselves.

But with bale quality being still the most vexing problem for recyclers, much of the focus of innovation has been on ways to improve the efficiency of sorting equipment and finding better ways to deal with the full-wrap shrink sleeves on PET bottles that make it difficult to identify the resin underneath.

“The technology is getting better on bottle sorting, infrared sorting, and flake sorting,” says Byron Geiger, president of Custom Polymers PET LLC, in Athens, Alabama. “You are getting better resolution on the optical cameras and better software on the electronics. “We are losing less PET in our sorting, so the new technologies are helping yields to some degree,” adds Geiger. “But overall, yields are down because bale quality has declined.”

As Geiger explains, a lot of the innovations that have emerged have been in response to “shrink-wrap labels and other non-friendly material and problematic bottles. So we end up spending more resources,” he says, to get the same amount of material out of bales.

It’s a dilemma that equipment manufacturers have made their top priority.

“The number-one thing customers are looking for us to do is to prevent the loss of good material,” says Felix Hottenstein, sales director for MSS Inc., the Nashville, Tennessee-based optical sorting division of CP Group. “That’s driving a number of new developments that help customers improve product quality and decrease the loss of good product.”

Just this past December, MSS made improvements to both its Cirrus and L-Vis™ optical sorters, integrating the latest generation high-resolution cameras and infrared spectrometers. Both sorters also now have an optional illuminated reference, which allows the materials to be sorted in-flight over the illuminated reference instead of the traditional approach of detecting and sorting materials on a slide or conveyor belt. It also makes it possible to better adjust the color and light intensity for maximum contrast.

As a result, the company’s MSS Cirrus optical sorter, for example, now has scan rates of 345,600 pixels per second. Its other optical sorter, the L-Vis, is a high-resolution color sorter for small particles, based on camera identification technology.

As a result, the company’s MSS Cirrus optical sorter, for example, now has scan rates of 345,600 pixels per second. Its other optical sorter, the L-Vis, is a high-resolution color sorter for small particles, based on camera identification technology.

“The cameras are getting higher and higher resolution, so we can sort out smaller and smaller particles and get higher accuracy,” says Hottenstein. “The resolution is at least 36 times higher than what we used to have.” In addition, software improvements enable image processing that is “orders of magnitudes” faster than in the past, he adds.