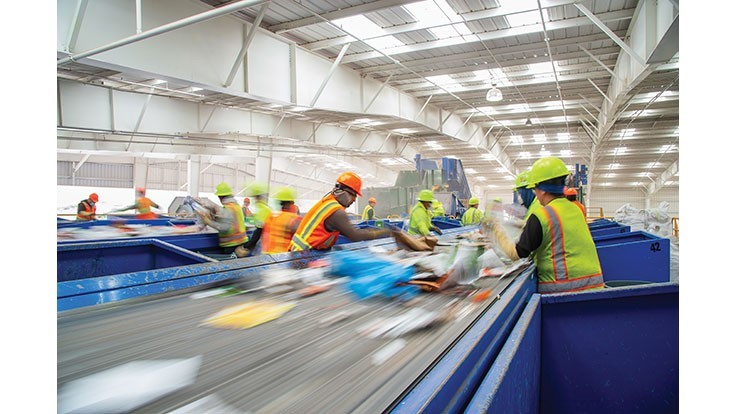 Having that stake in the community is why MWA started a number of innovative programs, including Compost It for businesses and residents, a R&D recycling program to help construction companies get LEED credits, a cardboard only collection and recycling program, a curbside household hazardous waste pickup and most recently approving plans to build a new single-stream material recovery facility (MRF) for Central Iowa.

“Innovation is a big thing here,” McCoy says. “All of these ideas have come from somebody inside our agency or someone pushing from outside and we take it and run with it. If you bring ideas to us, we’ll vet them and you’ll be a part of the launch.”

MWA, which is made up of 17 board members who are elected officials, formed 50 years ago to open a landfill in the region. The authority, which represents 22 communities, currently manages two landfills, two transfer stations and contracts with haulers, but doesn’t own a material recovery facility (MRF).

McCoy says last summer was an “eye opener” for MWA when its current processor Mid America Recycling, Des Moines, delivered truckloads of high-quality baled mixed paper to the landfill. The company reportedly had difficulty finding buyers for the material.

“We have one of lowest contamination rates at 10 percent, and we have some other partners in the space that continued to move mixed paper during this time,” McCoy says. “It was a lack of relationships and inability to move product and we were not going to accept that.”

McCoy adds MWA has observed material entering the landfill that could be diverted and a need for updated equipment and technology at the MRF to process today’s material stream. MWA conducted a feasibility study, which found the MRF would cost about $24 million and two years to build, which coincides with the end of MWA’s contract with Mid America in 2021.

“It’s not the greatest business model in the world today,” McCoy admits. “Markets are the lowest, but I can tell you demand of the people is high. Do we want a sustainable model for the next 50 years or are we going to roll the dice every month?”

For every new project, MWA brings in a round table of stakeholders to discuss issues. For example, McCoy says the entity is hosting a regional food waste forum with grocery stores and restaurants to discuss the possibility of implementing food waste in the composting program. When Des Moines’ privately-owned R&D recycling company went bankrupt, MWA brought in developers, architects and construction companies to discuss the launch of an “immediate” R&D recycling program. McCoy says MWA will approach the MRF project the same way with “thoughtful, strategic partnerships.”

He adds that MWA has already built partnerships with buyers over the past two years through its cardboard recycling program.

“On the financial side, on the surface you may say it’s cheaper to go to landfill, but if you really crunch the numbers it’s not,” McCoy says. “At the landfill, we sell air space. If you put 20,000 tons of recyclables in landfill, I’m losing that space to sell for waste.”

MWA issued a request for proposal (RFP) for a supplier to provide equipment for a facility that can process 25 tons per hour or 45,000 tons per year, with the option to expand to 35 tons per year or 60,000 tons per year. The authority awarded the contract to CP Group, San Diego. Bulk Handling Systems, Eugene, Oregon; Machinex, Plessisville, Quebec; and Van Dyk Recycling Solutions, Norwalk, Connecticut, also bid on the project.

“It’s fun when you put an RFP out and you get four bidders,” McCoy says. “It means they want to do the work and they’re hungry. It was a great bid process.”

Along with focusing on technology and optical sorting to remove packaging from the material stream, MWA will also use CP’s Anti-Wrap Screen to reduce downtime and increase fiber recovery. Glass will also be separated at the front end of the system. MWA is also launching glass collection points in the region in effort to remove glass from the recycling stream.

After touring several facilities, McCoy says several sites shut down at least twice a day to remove plastic bags from machines, which is why MWA is installing the screen. He adds Scott County, Iowa, has had to do many retrofits over the years to be able to process excess material outside its service area, so MWA is preparing for future growth as well having the capacity to meet Central Iowa’s needs today.

“We’re focusing on what we can do upfront,” McCoy says.

MWA owns land adjacent to its transfer station where the MRF will be built. MWA will work together with CP Group and engineers on the design of the building over the next few months, McCoy says.

In addition, MWA is partnering with Iowa Economic Development Authority to identify local end markets for material, including breweries to use recycled glass to make new bottles. The authority is looking to establish contracts to guarantee regional companies a supply of recycled material.

“I don’t think we were lining up to build a MRF, but it’s obvious it’s what we need to do when it comes down to the future of recycling for Iowa,” McCoy says.